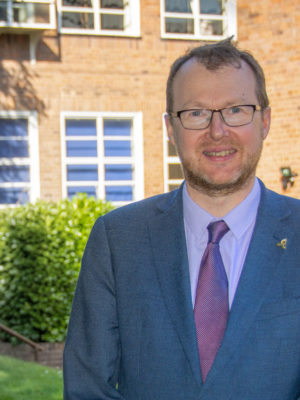 Dominic has been the Headteacher of Bishop Vesey’s Grammar School since September 2012. He studied at History BA(Hons) at Durham University, and stayed on to study for a PGCE in History and Religious Education.

In 2009 he attained the National Professional Qualification in Headship (NPQH). As part of this course, and was fortunate enough to be mentored by, Mr Kamal Hanif OBE, as well as our very own Mr Iddon, Dominic’s predecessor as Headteacher.

Family time is very important to him. To relax, he often enjoys football, playing the piano, going to the cinema and watching live theatre and concerts. A self-professed avid reader, Dominic follows current affairs and political debates with a keen interest.

His hope for all our students here at BVGS is that they enjoy making the most of the inspiring and excellent academic and social opportunities that the Vesey Experience offers them.