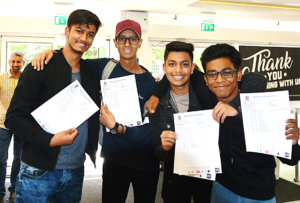 Bishop Vesey’s Grammar School is celebrating an outstanding set of results under the new and much tougher national examination system. In total 70% of the grades were awarded at 7 or better and very pleasingly nearly half of the grades attained were at the top new grades of 8 (A*) and 9 (A**). The average student Attainment 8 score is up to two points from last year to 74, the equivalent of attaining four grade 8s and six grade 7s.

“Staff and students have worked very hard to adapt to the new tougher GCSEs. They have done themselves proud. An excellent 70% of all grades were awarded at grade 7 or better with around a fifth of grades secured at grade 9 and 46% at grade 8 or better.

I am so pleased that the School has sought to keep a strong sense of balance and community over the last five years. So many of our Year 11, who have been very well led by Head of Year, Mr Alex Davis, Mr Russell Bowen, Deputy Head i/c Key Stage 4, Mrs Heather Hodkinson, KS4 Learning Mentor, and the rest of the staff, have engaged with the extra-curricular life of the school. They have particularly excelled in sport (this year group have been national hockey finalists as well as national rugby quarter finalists) and music, and have been fantastic ambassadors for their school and country on trips here at home and abroad.

This Year 11 cohort have developed superbly as young men, at the same time as producing outstanding examination results. We are very proud of them all and we wish them the very best with their next step in education and training.”