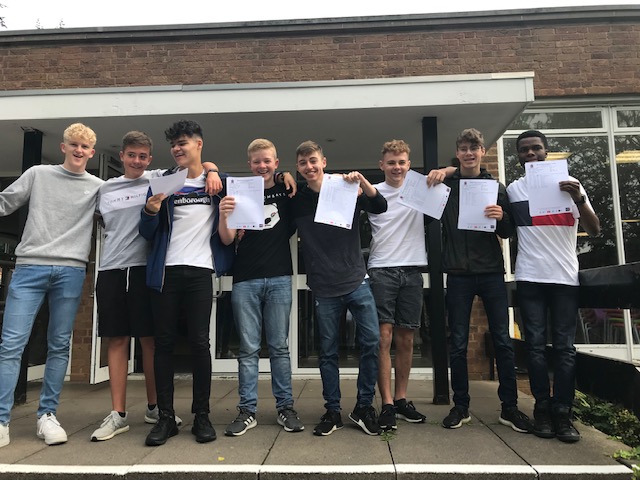 Follow this link to see the GCSE results grid.

Bishop Vesey’s Grammar School is celebrating another outstanding set of GCSE results, with a  school record being set. 73% of all GCSE entries were awarded at grades 7, 8 and 9. Half of the grades attained were at grade 8 and 9, and a fabulous 29% of grades were awarded at the very highest level, grade 9. The average student Attainment 8 score is 76.21, the equivalent of attaining six grade 8s and four grade 7s.

One family was particularly celebrating this morning. Twins, Jack and Thomas Moore both attained a phenomenal seven grade 9s!  In total, there were forty one students (32% of this year group), who attained an impressive five or more grade 9s. In fact, the modal grade, the one most attained by Year 11, was actually a grade 9!

Every student attained at least a standard pass in English Language and Mathematics, with 89% of the grades in Mathematics awarded at grades 7-9.

“Staff and students have worked very hard. They have all done themselves proud and attained the best GCSE results we have ever had.

I am so pleased that the School continues to keep a strong sense of balance and community. Our Year 11 students have been intelligently led by the Head of Year, Mr Tom Williams, Mr Russell Bowen, Deputy Headteacher i/c KS4 and Mrs Heather Hodkinson, KS4 Learning Mentor and well- supported by an excellent staff, parent and governing body.

The students have engaged well with the extra-curricular life of the School. In their midst, there are many talented musicians and sportsmen. This cohort have been well-represented on recent music tours to Paris and rugby tours to Singapore and Japan.

This Year 11 cohort have developed superbly as young men during their time with us. We are very proud of them all and we wish them the very best with their next step in education and training.”